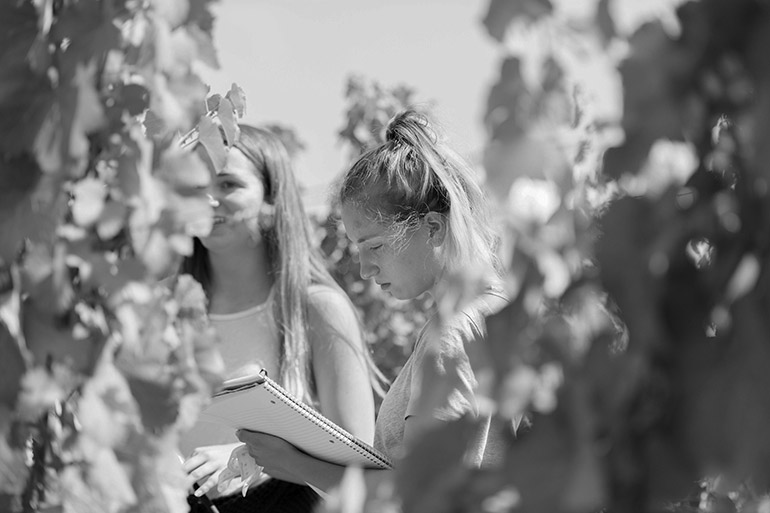 UBC’s Wine Research Centre, located on the Okanagan campus, is dedicated to fostering cooperation between academic institutions, the wine industry sector and communities around the world.

Wine Research Centre will expand its presence across both UBC campuses

The renowned wine region of BC’s Okanagan Valley now boasts a new research hub, as UBC shifts the headquarters of its acclaimed Wine Research Centre (WRC) from its Vancouver campus to its Kelowna-based campus.

The move provides the WRC with a dual-campus presence in Vancouver and the Okanagan, where researchers have developed strong collaborations with the BC wine community. The WRC, one of only two such research centres in Canada, will be led by its newly-appointed director Jacques-Olivier Pesme. A founding member of the Board of the Institute of Vine and Wine Science in Bordeaux, France, Pesme has been working with UBC since 2012 as special advisor to the dean of the Faculty of Management.

“The Okanagan is an ideal environment for the next chapter of the WRC,” Pesme says. “All the major research and education wine institutes in the world are situated in close proximity to vineyards, wineries and wine visitors. The WRC will combine operations between the Okanagan—home to more than 80 per cent of BC vineyard acreage, and Vancouver—a gateway to the world.”

First established in 1999 on the Vancouver campus, the WRC is dedicated to interdisciplinary research, education and development, with a core mission to support a sustainable Canadian grape and wine industry. It brings together researchers, faculty and staff from across UBC as well as Canadian and international partner institutions to undertake cutting-edge research in oenology, viticulture, management and social sciences. The WRC also provides academic and extended education, and engages closely with industry and wider communities.

“We are thrilled by this development of the Wine Research Centre,” says UBCO’s Provost and Vice-President Academic Ananya Mukherjee Reed. “This is an important step towards the university’s mandate as a partner in regional socio-economic development. Wine research in the Okanagan provides experiential learning opportunities for students, accelerates innovation and creates an opportunity for strengthening connections with our industry partners.”

The changes at the WRC will enhance UBC’s wine research and education, while supporting and stimulating the provincial economy. BC’s wine industry has an annual impact of $2.8 billion and employs about 12,000 people.

“The WRC will bring together researchers from both UBC campuses, and build upon contributions to cutting-edge wine research conducted in facilities like the Michael Smith Laboratories on the Vancouver campus over the past two decades,” says Roger Sugden, dean of the Faculty of Management and a core contributor to the WRC. “BC’s wine industry has a major influence on the economy and society of regions across the province. The WRC will help the industry, and communities across the territory, to shape that influence by sharing knowledge and offering opportunities to explore different possibilities.”

Among the WRC’s new initiatives are plans for a sensory analysis lab in Kelowna. It will feature research facilities and offer programs for the public to learn about wine tasting, oenology and the local industry.

Ongoing WRC initiatives include the annual Wine Leaders Forum—now in its seventh year—where wine owners and principals come together with researchers for strategic planning. The WRC also conducts industry seminars and workshops across the province, and maintains UBC’s Wine Library in Vancouver which currently houses more than 4,500 bottles of wine from all over the world.

“Because the WRC is now headquartered in the heart of BC’s wine country, it is well-positioned to engage even more deeply with growers, wineries, tourists and residents,” says Pesme. “I am excited to be guiding the centre in its role as a contributor to the continued growth and the success of this rapidly changing wine territory, and especially to reinforce its international reputation.”

The Wine Research Centre is a unique research and education centre that supports the development of a sustainable Canadian grape and wine industry through world-class research, excellence in wine education, applied solutions and knowledge exchange.

The Wine Research Centre operates across UBC campuses in Vancouver and the Okanagan, where it is headquartered. It conducts cutting-edge research in oenology, viticulture, management, and social sciences; provides academic and extended education; and engages with industry and communities on the challenges of wine territory development.

The centre is dedicated to fostering cooperation between academic institutions, the wine industry sector, and communities around the world in a way that encourages growth with integrity and inclusivity. Its ethos is one of rigorous curiosity and open-minded collaboration while pursuing excellence.

BC’s wine industry by the numbers